The Wind sings of a Journey

Today I'm going to step away from the usual articles about my reading and musical tastes to talk a bit about a video game that kept me the most occupied some years ago, and some of its predecessors.

It should be obvious, given the title above, that this is about the game series ...of Mana (but not just them). The game that is the center of my interest here is Legend of Mana, but I will also write about Secret of Mana and 聖剣伝説3 (Seiken Densetsu 3) -- never released outside of Japan -- and Secret of Evermore, the little, unfairly shunned, cousin. 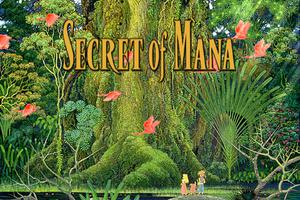 The first episode is really similar to the Final Fantasy type of games, but with the second episode, the distinctive elements from FF disappear and the Mana series gain a life of their own. It has since then evolved and now contains multiples games spanning various genres (action, tactical, dungeon crawler...) all with the common theme of the Mana Tree and protagonists that will protect it from those who seek to claim its power as their own.

To put it in a more personal perspective : Secret of Mana was one of the first, if not the first RPG that I have ever owned. When it came out (late November 1994), I was visiting a cousin in Germany to improve my German (I was taking it as my first foreign language back then). since I was very doubtful my parents would buy it to me or let me buy it, I used the occasion and bought it with allowance money there and brought it back to France. Yes, it means I played Secret of Mana in german with my brother (who was 10 at that time) with the helpful guide that came with the game (in German too, surprisingly). 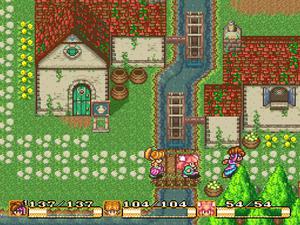 Ultimately, my proficiency was enough to understand what was said in the game, and the medium helped understanding eveything else. We played it for hours and hours (and then some more) to complete everything, level up all the weapons, raise the characters' levels, and boost all the magic spells to their maximum.

And nowadays, when I look at the game and play it on an emulator, I see what gave it its charm, but it does feel a little weird playing alone this game that I used to always play with my brother as the seconfd player. 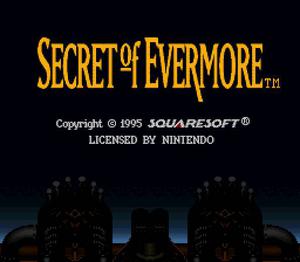 Later (two years? three years?), in a small shop in Saint-Malo that has since disappeared, we bought a second hand cartridge of Secret of Evermore. Evermore is a bit unusual: unlike all the other games in the series, it was produced by the American branch of Square instead of the Japanese branch. One of the effects is that many players have considered that Evermore was published in place of Seiken Densetsu 3, which is false; the choice not to translate the latter was taken independently of the decision to produce Evermore. Moreover, the atmosphere is quite original in Evermore: in Secret of Mana, all the action takes place in a world, on various continents which have their geographical specificities, but in Evermore, the action takes place in different times, from the Palaeolithic jungles and marshes, an ancient Coliseum and pyramid, a medieval market and an abandoned castle, to a space base, all inspired by the B-series films of which the protagonist is a fan. 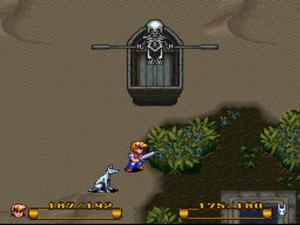 The atmosphere and gameplay are quite different: where Secret of Mana had an atmosphere quite close to the initiatory quest with a gallery of secondary characters helping the hero against a multitude of opponents with different objectives, Secret of Evermore is in my opinion much more oppressive, in the sense that interactions with other characters are quite limited spatially, and one is often (accompanied by his dog) alone facing nature or enemies. In terms of gameplay, there are some commonalities (in particular the combat part where one charges his weapon), but also great differences, especially magic: in Secret of Mana, it is enough to have mana, go in the menu and then simplycast the spell. In Evermore, you must have the right ingredients to cast your spell, it's Alchemy. And at certain points in the game, some ingredients are very easy to acquire, and others very rare, which will strongly influence the tactical choices in combat.

Similarly to Secret of Mana, I still have good memories of this game, though we regretted then that this game could not be played with two players, unlike Secret of Mana.

Much later, I bought a PSX, and one day brought it into Paris, on boulevard Voltaire, to have it chipped, which allowed me to play not just burned games, but also imported games, which brings us to one of my most favorite games ever on console: Legend of Mana.

Legend of Mana has never been published in Europe, much less translated. It was released in Japan in 1999, then in the USA in 2000. I bought it near Republic as an import, and with my chipped console I could play it and spend more time there than in Secret of Mana.

Why play it so much and spend so much time? The first reason is esthetical: Legend of Mana is one of the most gorgeous 2D games ever made. See for yourself. 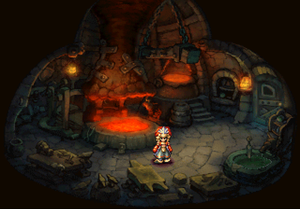 The game brings many innovations, and many of them revolve around the workshop: during the game, different characters will improve it, adding a forge, an instrument making workshop (magic in Legend of Mana) and a golem mmaking workshop (golems which can accompany the protagonist but are controlled by the AI). These three workshops are very rich, and add massive customization options. And for me, the forge was a formidable playground: at the time, the understanding of the depth of the system was rather rudimentary, based on translations of the Japanese Ultimania guide experiments. On the game's message board on GameFaqs, I joined at the moment when the great breakthroughs in understanding arrived, and I had discovered at the same time and independently of another player how to push the elementary levels of weapons higher than what was then done. And it was amazing! It was experimental research in the game, based on hypotheses and tests to confirm them. Since then, a simulator has even been created (because the code of the game for the forge is mostly known now). There's also a chorral, and one can catch many of the monsters from the game (and some half-humans) to raise them and take them as companions (instead of a golem). There's even a orchard to grow your own fruits.

In terms of story, Legend of Mana also differs a lot from other RPGs because overall, the protagonist is not the hero. The protagonist is the secondary character of the many stories whose main characters are accompanied by us. There are three great stories (arcs) in the game: the Jumis, Larc and Sierra, and Matilda and Irwin, and within these arcs, there are side quests. There are also a multitude of small stories composed of one or more quests that sometimes intersect (Niccolo, the young magicians Bud and Lisa, Gilbert, Rachel...). In the end, the protagonist is a catalyst for all these stories, helping the Mana Tree (the protagonist restores the places of the world of Fa'Diel, in game by placing artefacts on the --originally blank-- map).

In short, it is beautiful, it is rich, the characters are varied, with nuanced motives (there is no real "villain who wants to destroy the world because he is wicked", all the antagonists have their own reasons for their actions, and you sometimes find yourself making difficult choices, one of which involves the permanent death of a character), and I advise everyone to get it and play it.