The End is the Beginning is the End

Tonight's article is about a recent buy (actually, semi-recent, I've owned the novel for a while, but took the opportunity only recently to buy the manga): All you need is kill, by Hiroshi Sakurazaka, with illustrations by Yoshitoshi ABe and its manga adaptation by Ryōsuke Takeuchi, drawn by Takeshi Obata. A movie adaptation was released under the title Edge of Tomorrow, but I won't talk about it here, because it differs a lot from the original story.

From ethers tragic I am born again

The story follows Keiji Kiriya, a young recruit in the United Defense Force. He, and the UDF he is a part of are fighiting against mysterious creatures names Mimics, and despite all the technology that the UDF holds (such as exoskeletons for its soldiers), the Mimics relentlessly push back the human forces regardless of their efforts to stop them. During his first fight, Keiji seemingly dies after killing a stranger than usual mimic, but through some unexplained phenomenon, he wakes up in his bunk bed, back at the military base, the day before the fight that should have been his last. 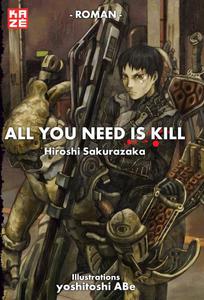 The original novel, by Hiroshi Sakurazaka, is a light novel (a type of Japanese novel aimed at the young adult audience), illustrated by Yoshitoshi ABe (Serial Experiments Lain, Haibane Renmei...), whose style is recognizable in the character design. It was published in 2004 in Japan, and a manga adaptation was published in 2014.

The manga is drawn by Takeshi Obata (Death Note) based on th adaptation written by Ryōsuke Takeuchi.

Keiji Kiriya is a young recruit from the United Defense Force. At the beginning of the novel (and the manga), he made the very ephemeral acquaintance of a soldier in a red exoskeleton, who told him she was named Rita Vrataski, then he dies attacking a mimic. The End. 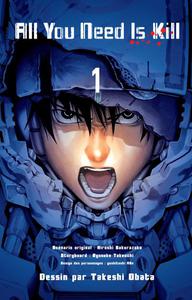 However, not unlike in Groundhog Day, Keiji wakes up at the base, in his bunkbed. Though conversations, he realizes that he is back on the eve of the battle that will be fatal to him. The day is similar to the previous one, but during the battle, he dies even faster, and again, finds himself in his bed. Gradually, he realizes how the loop in which he is a prisoner works, and he realizes the differences between each loop, and he starts the habit of writing down on his hand how many loops he went through to keep track of how many times he died. Each iteration makes him more effective as a soldier. 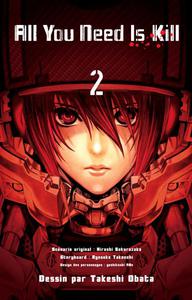 After several dozens of iterations, he starts figuring out the limitations imposed by his armament and he then begins imitating and copying Rita (nicknamed "Full Metal Bitch"), who does not fight with traditional weapons but with a gigantic battle axe. Similarly, from iteration to iteration, he becomes more and more efficient and progressively realizes how much Rita and him are similar.

I will not tell you everything, it would be a shame to spoil all the story. ;) I recommend both the light novel and the manga, choose either of them according to your reading preferences. If you've seen Edge of Tomorrow, ditto, come back to books, I think they're better.