Sell Me a Coat

First article today to speak about How the Marquis Got His Coat Back by Neil Gaiman. It is a short story taking place in the world of Neverwhere (another book by Gaiman which I recommend reading, a novelization of a TV series by the same author, later presented as a play, and as a radio play and comic books).

Sell me a coat with buttons of silver 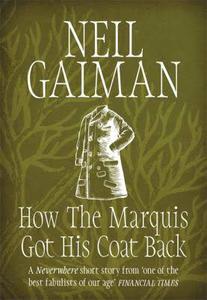 The story takes place, for those who have read Neverwhere, between Richard Mayhew leaving London Below and the end of the book. In this story, we follow the quest undertaken by the Marquis de Carabas, who after losing (among other things) hiw coat, sets out to find who has got his coat, and how to get it back. In order to achieve this, he will have to overcome many dangers, hampered by the loss of his precious coat. He will get help, somewhat against his will, by a character as extraordinary as him, whom he would have rather not met again.

It is a short short story, sold in pocket form, thin. It can be read in the time it takes to read at night before going to sleep, and if one enjoyed Neverwhere, then one will be pleased to come back to familiar places, and to learn more about the Marquis and some of the inhabitants of London Below.